We are very excited to spotlight our Human Resources Manager, Kate Fiorucci this month! Kate is not only passionate and deeply invested in HR, but our TGG team members as well. Keep reading to learn more her perception of HR, how it’s evolving in the workplace, and where she believes it’s heading in the future.

Check out our Q&A with Kate now!

We’re so excited to talk to you today, Kate! To kick things off, what made you want to pursue the career you have today?

I pretty much found Human Resources (HR). This is my third career and I just ended up in it because I found myself back in an office situation, and I found out that was the stuff I cared about the most like how people are doing. How is the culture? It’s a better fit for me than any other job I’ve ever had. 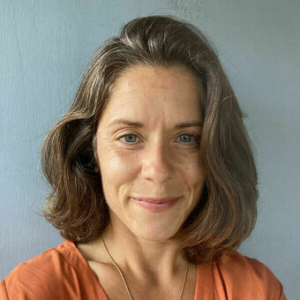 That’s great to hear! How did you end us in this position at TGG?

I came in originally as the TGG Office Manager. I hadn’t been working for four years, and I wanted to get back into work slowly, and I thought it was going to be really fun to be the den mother and order coffee and snacks for everyone and then here we are three years later. Also, things came up that I was interested in, opportunities came my way, and obviously with COVID too, that changed a lot for us going from three offices to fully remote.

Your role with TGG has definitely evolved, what parts do you find most enjoyable or interesting?

I love having the opportunity to get to know people informally. I think work has changed so much, especially even in just the years I’ve been in a professional setting. You can bring so much more of yourself to work now than you used to be able to, and I think our people are really good at opening up and sharing about themselves. I just I think there are so many little moments that are very precious and wonderful.

There’s a perception that HR departments are the buzz kill of any company (think Toby from The Office), what is your perception about HR?

Well, there is a big cultural misconception about it, so my own feelings are deeply ambivalent. I don’t worry about that at TGG because I don’t feel like we have that perception in our organization, and I think the biggest misconception about HR Is that it can only be what it’s always been. I think that HR has traditionally had a really specific role in companies. That has been the result of business leaders kind of deprioritizing their people’s stuff, but I think that’s changing. I get the sense that HR has changed a lot in the past like five to ten years and I think it’s going to change a little more. HR isn’t just like a compliance wing somewhere over in the corner. It can be a strategic partner.

That’s very true! Is there any advice or words of wisdom you’ve picked up in your life that you still live by today?

I have a post-it on my door right now that says “Real steadiness. Vast openness.” At work and in life, that’s what I’m striving for all the time. Real steadiness is about being a solid, still point for myself and for other people in a world that is neither solid nor still. I like to think about how I could show up that way for myself, and how I can show it that way for other people. Vast openness is open to possibilities and also a goal of mine is to be big enough to have room for us all. Everybody has so much stuff going on in work, in life so you have to be really big to hold it all and to have space for all.

Those are great words to live by. Going back to your role at TGG, what attracted you to work here?

I saw the job posting on Indeed and I had the best interview with Laurel [Swanson]. I came in and I had such a good feeling. I remember walking out of that interview and being like ‘this is the first time I’ve ever shown up in a professional setting where I felt like myself.’ It was amazing! After I met with Laurel, I was like, ‘this is the job I want. This is the place that I want to work. These are the people that I want to work with.’

As we wrap up, is there anything else about you or your job that you would like people to know?

This is so nerdy, but I love HR. I think it’s the best. I don’t know if people know this about HR people, I didn’t know until I was in HR, but we love you guys for real and I love the people at TGG! Yes, it’s a career and it’s a business, but there is an element of it that is just like so deeply human and real and I did not know that about HR, until I found myself in it.

This post was reviewed by our team of accounting and financial experts. TGG’s mission is to make business owners’ lives better through excellent financial management. We strive to provide the most up-to-date and objective information on accounting-related topics so our readers can make informed decisions based on factual content. All posts undergo a review process with at least one member of our Leadership Team to ensure accuracy.

This post contains trusted sources. All references are hyperlinked at the end of the article to take readers directly to the source.

Sign up to receive accounting tips, videos, news and webinar info before anyone else

© Copyright – TGG Accounting | TGG Accounting is not certified by the California Board of Accountancy to perform public accounting. Therefore, we do not provide tax return preparation, audits or CPA reviewed or compiled statements. Disclaimer: Services being offered do not require a state license.

The Top 5 Ways to Fight Inflation

How to Build Your Cannabis Accounting Department for Successful Tax Complia...
Scroll to top